The SASUKE All-Stars (サスケオールスターズ) are a group of six competitors that were formerly considered by TBS and the fans as the most likely to achieve success on the course. Two of the six men, Nagano Makoto and Akiyama Kazuhiko, have obtained kanzenseiha. They are often given the highest numbers (often taking 97 or 98 and above). They also do events together, such as the Maguro festival and even VIKING.

Following the events of SASUKE RISING, the 28th competition and the first competition since Monster9's liquidation; the SASUKE All-Stars were officially disbanded as a group, and were not permitted to return to further competitions; both were reversed in the events leading up to SASUKE 29, although one All-Star: Akiyama Kazuhiko, chose to remain retired.

Since then, All-Star: Nagano Makoto has also retired in SASUKE 32.

From SASUKE 29 until the present, the All-Stars are now considered as the Former All-Stars.

A former crab fisherman and the first man to ever achieve Kanzenseiha, having done so in SASUKE 4. He has not been able to repeat his success, however, due in part to an eye condition known as Degenerative Rectinosis that has plagued him for years. Overall he has competed 19 times and has been officially retired since SASUKE 28 in 2012.

A fisherman and Captain of the 28th Konpira Maru and the 50th Konpira Maru. He is the second man to ever achieve Kanzenseiha, having done so in 17th competition, after barely missing it in the 12th competition by 0.11 seconds. He has a record of reaching the final stage 5 times, 3 of those times being consecutive, and was seen as likely to repeat his success even after his Kanzenseiha during the Shin-Sasuke era. He wears #100 most of the time (14/30 competitions). Overall he has competed 26 times, a number surpassed only by three of his fellow All-Stars: Katsumi Yamada, Toshihiro Takeda and Shingo Yamamoto, and has been officially retired since SASUKE 32 in 2016.

A former firefighter from Gifu and currently a Gym owner. He is best known for his incredibly consistent performances. He currently holds a SASUKE record, having 13 appearances in the third stage, seven of which were consecutive (SASUKE 11 through SASUKE 17). He can be seen usually wearing his trademark orange fire fighter pants and dark blue shirt. However, he hasn't made it to the final stage yet. Overall he has competed 30 times and continues to compete to this day.

A former gas station manager that is best known for his flawless attendance record, having competed in every SASUKE competition since the beginning. He is also the only person to have attempted the first and second version of the Final Stage. He can be seen wearing his trademark gas station uniform shirt and cap (always with Esso/Mobil branding); he has only competed without it four times. (1st, 4th, 28th and 29th competitions). He continues to compete to this day.

A civic employee in his home village of Inba, Chiba Prefecture in the Health and Services department. He is also known for building obstacles in his backyard (over 13 of them, in fact), and many competitors have visited his home to train on the 'Shiratori Shrine' (However, as of SASUKE 30, it has been demolished). He has competed the least of the All-Stars: only 12 times due to chronic back and neck pains that have continued to plague him for years. Despite having only competed once since SASUKE 21, he is not officially retired and has not ruled out the possibility of returning should his health permit it, although this is unlikely.

A former propane tank delivery driver and the oldest of the All-Stars, he dedicated his life to SASUKE after the factory shut down and he lost his job, and is one of only two All-Stars (along with Yamamoto Shingo) to have competed since SASUKE 1. He has "retired" from SASUKE on four separate occasions following the 8th,12th, 24th and 28th tournaments, but returned each time nonetheless. He was given the nickname "Mr. SASUKE" because he was once thought to be the most likely competitor to clear all four stages, but hasn't passed the first stage since SASUKE 12. Overall he has competed 28 times, second only to Yamamoto Shingo, but was barred from competing following SASUKE 30 in 2014. Despite this, the ban was officially overturned prior to SASUKE 33 in 2017, the 20th anniversary of Sasuke, allowing Yamada to compete once more. Additionally, he has trained a team of protégés nicknamed Yamada Gundan or the Black Tigers since SASUKE 29 in 2013. He has officially retired after SASUKE 33. 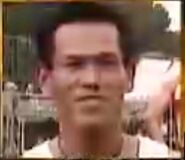 Retrieved from "https://sasukepedia.fandom.com/wiki/SASUKE_All-Stars?oldid=78111"
Community content is available under CC-BY-SA unless otherwise noted.