The 24th competition, official name: SASUKE2010元日 (literally SASUKE2010 New Year's Day) is the seventh tournament since Nagano Makoto's kanzenseiha. It was aired January 1, 2010. The broadcast lasted a record five and a half hours. Two preshows aired. The navi aired on December 28, 2009 and a preview show, dubbed the "SASUKE History Special", aired an hour before the tournament.

In the First Stage, the X-Bridge replaced the Curtain Slider. However, 12 were able to clear the first stage, and it included many former trial qualifiers and recurring competitors. In his return after SASUKE 23, three time finalist Omori Akira (Listed as his name Monkikki) surprisingly failed the Jyunidantobi when he failed to land stably on the last step. Threatening retirement once again, Yamada Katsumi made it through much of the First Stage but was stopped at the Soritatsu Kabe. Takeda Toshihiro was the only SASUKE All-Star to clear stage 1; this was his 15th time doing so, a SASUKE record. Kanno Hitoshi and Yamamoto Shingo both timed out on the Tarzan Rope after committing the same faults (having to swing twice to land on the landing platform on the Half-Pipe Attack, and taking multiple attempts on the Soritatsu Kabe). Nagano Makoto made it to the end of Jumping Spider but he was too low and slipped into the water. It was Nagano's second earliest failure (along with the Jump Hang in SASUKE 10). The time limit also seemed to be very lenient as 3 competitors (Takahashi Kenji, Urushihara Yuuji, and Tajima Naoya) managed to clear with more than 20 seconds on the clock and 4 (Kawaguchi Tomohiro, Ishikawa Terukazu, Hashimoto Koji, and Sato Jun) cleared with more than 10 seconds.

In the Second Stage, most competitors went deep into the course. Despite the addition of a newly redesigned Balance Tank, 7 managed to clear, including Takahashi Kenji who did so with 32.11 seconds left. The two obstacles that eliminated the most competitors in the previous competition, the Salmon Ladder and the Unstable Bridge, only eliminated Sato Jun and Kawaguchi Tomohiro. The Metal Spin eliminated 3 competitors (Sato Hiromichi, Ishikawa Terukazu, and Washimi Yuuji). For the record thirteenth time, Takeda Toshihiro made it into the third stage.

In the Third Stage, A new obstacle was added, the Rope Junction, which proved to be a strength drainer as no one failed it. Competitors again went deep into the course. Nobody failed the Shin-Cliffhanger and 5 competitors, all consecutively, cleared, including 4 from #92 to #95. Tajima Naoya made a faux pas on the stage's final obstacle, the Gliding Ring. He failed to realize that the ring was behind stopper and lost his grip when he tried to take off and the ring did not slide. Takeda Toshihiro was once again unable to clear as he was too exhausted on the Spider Flip and failed on the 1st wall. Okuyama Yoshiyuki became the oldest competitor to attempt the final stage, doing so at age 39, breaking Nagano Makoto's record (he attempted the final stage at age 37 in the previous tournament).

In the Final Stage, the first two competitors timed out on the G-Rope as did the competitors in the last two competitors. However, Urushihara Yuuji managed to clear with 3.57 seconds left and became the third person to achieve kanzenseiha, joining SASUKE All-Stars Akiyama Kazuhiko and Nagano Makoto who interestingly both failed Stage One. The remaining two final stage competitors also ran out of time when climbing the G-Rope. 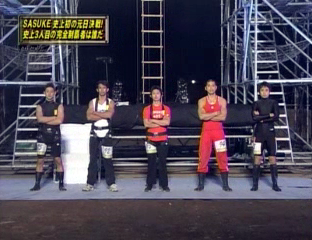 Retrieved from "https://sasukepedia.fandom.com/wiki/SASUKE_24?oldid=22619"
Community content is available under CC-BY-SA unless otherwise noted.