In qualifying, Rick was viewed with some skepticism, as he was 37, much older than the average competitor, something host Blair Herter even remarked about. However, he proved the skeptics wrong. Despite an early slow pace on the first four obstacles, he managed to make up time greatly on the Pipe Slider, as he employed a new technique of jumping with the bar as it slid, allowing for greater forward momentum. He then flew up the Warped Wall in one try to hit the buzzer at 58.1 seconds. He continued to defy expectations in the semi-finals, where he hit the buzzer in 1:41.3 minutes, placing 12th overall and moving on to the finals. In the finals, he continued his streak of success, by clearing the first stage of the finals in 2:01, and the second stage in 28 seconds, nabbing the final spot in SASUKE 23.

In the tournament, he performed well. He made it through the first few obstacles in decent time. However, he slowed down on the Spider Walk portion of the Jumping Spider because his shoes had trouble sticking to the walls. He made it to the Soritatsu Kabe but after several failed attempts, he finally cleared with 20 seconds left. He made it to the Slider Jump with ten seconds left and timed out on top of the net.

Huelga then competed in American Ninja Warrior 2, despite a herniated C6. His injury seemed to affect his performance, as he had a shaky run through the first two obstacles, before his run came to a shocking end on the Cross Bridge. It was shown that he tripped and attempted to make a long dive for the platform, only to come up short, much like Paul Darnell's earlier run. 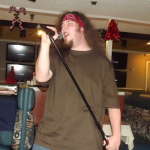