The following is a list of KUNOICHI All-Stars. Though Kunoichi has never really had a list of "All Stars"; more of a list of key players, all of them at the time were the most likely to complete the final stage. In all, there have been 12 "All Stars" over the years, but the current list includes Miyake Ayako, Komiya Rie, Satomi Kadoi, Tanaka Maho, Nishimura Chie and Mizuno Yuko. The list of former all stars includes Asami Sayaka, Izumi Mika, Watanabe Kazue, Hanzawa Tomomi, Yusa Masami and Yamada Miho. Out of the 12, only 8 have reached the final stage, with Asami being the most notable to have not been a finalist. Miyake has had the most final stage attempts at three, and Mizuno is the only other one to attempt it more than once.

Ayako Miyake (三宅 綾子, Miyake Ayako?) - This three-time consecutive Kunoichi champion has earned her the nickname "Queen of Kunoichi". Weighing only 90lb (41 kg), Ayako is also an acrobatic dancer, who used to work for Muscle Musical. She achieved total victory in the 4th, 5th, and 6th competitions, and remains the only competitor to have ever completed the final stage multiple times. In the 7th Competition however, she fell on the last obstacle of the Second Stage, the last part of the Swinging Beams, which was a metal beam without a rope support like the last two. Her failure left the other competitors in visible shock because, in the words of the narrator "She was the competitor everyone was counting on!" Her current age is 40 years. As of 2008, she has cleared the first stage four times in a row and the second, third and final stages three times in a row. Recently Ayako and a few other Muscle Musical members including the creator and Sayaka Asami broke away and created their own group, so it is now rumored that she will no longer complete.

Rie Komiya (小宮理英, Komiya Rie?) - This is one of the top competitors on Kunoichi and is notable for advancing all the way to the Third Stage in her first tournament, and failing Domino Hill (4th Competition). In the 5th Competition, she looked better than Miss Perfect herself, however by the time she reached the Skyway Pole in the final stage she looked defeated and her time ran out. She is a Japanese newscaster and went into modeling after her appearance on Kunoichi. She was also one of only four competitors who defeated the First Stage in the 7th competition, but she failed on the Monkey Bars in the Second Stage. As of 2008 she has cleared the first stage three times,the second stage twice,and the third stage once. Rie Komiya also competed in SASUKE 22 but was disqualified on the Jumping spider. Komiya achieved Kanzenseiha in KUNOICHI 8, along with Satomi Kadoi.

Yuko Mizuno (水野 裕子, Mizuno Yuko?) - After almost completing the Final Stage in the 2nd and 3rd Competitions, she was thought to be the most likely competitor to complete the Final Stage, and was once thought to be the "Queen of Kunoichi". In the 3rd Competition, Yuko missed the button by 0.10 seconds. Since then, she has only made it to the Third Stage once in the 5th competition, and hasn't passed the First Stage in the 4th, 6th and 7th competition. Besides being a Kunoichi competitor, she is also a celebrity athlete, and a regular Sasuke competitor. Fans also call her Ms. Kunoichi, for her similar status to Mr. Sasuke, Yamada Katsumi. As of 2008 she has cleared the first stage three times, the second stage three times and the third stage twice.

Maho Tanaka (田中真帆, Tanaka Maho?) - She is a professional snowboarder/wakeboarder. Maho was considered an All-Star of Kunoichi by the second time she has competed. She is known for her impressive speed nearly matching Ayako Miyake's records. Also she made it to the Final Stage during her second appearance (her first tournament is in the 4th tournament), in the 6th tournament, where she completed the Third Stage most difficult obstacle, Domino Hill, at a very quick pace, that exceed any competitors' time who attempted or completed that obstacle (including Ayako Miyake). As she made it past the first three stages, it seems that she wasn't nervous about any obstacles standing in her way, but by the time she reached the Final Stage, she was unsure about her footing, constantly looking down, and began to lose speed on the Brick Climb, which by the time she completed time was already up. In the 7th tournament, she was the only competitor to reach the Third Stage, however she was defeated by the obstacle that she had defeated in the previous tournament, Domino Hill. In the 8th tournament, the pressure was on her to achieve total victory, but in this tournament, the course was completely changed, as 4 people attempted the First Stage at once for two flags at the end. She fell behind on the Hanging Logs, and hesitated on the Swing Jump, causing her to not reach the end before both flags were taken. As of 2008 she has cleared the first stage twice, the second stage twice and the third stage once. 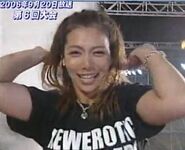 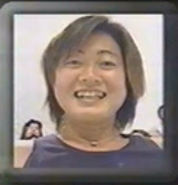