Fuandou (不安道) was an obstacle from KUNOICHI 3 to KUNOICHI 7. The objective of this obstacle was to cross a bridge that was supported by a central axis, so that when a competitor tried to traverse the obstacle, it would spin in any direction.

The first version of Fuandou was a replacement for Boufuudou and Sekisho Michi from KUNOICHI 1 and KUNOICHI 2. It was extremely similar to Yureru Hashi, which was used for the first seven SASUKE tournaments, with the only difference being that the bridge was longer and thinner. In addition, the bridge rotated on a central axis, meaning it was being supported in the center.

In order to make the obstacle more difficult, there was a block placed along the center of the obstacle, so the competitors couldn't just walk across the obstacle. In addition, the obstacle did not move much, and it rarely ever tilted to add difficulty. With its placement as the fifth obstacle in the First Stage, this obstacle was proven to be extremely easy, as only one competitor failed.

After Mizuno Yuko's near miss of kanzenseiha in the previous tournament, the First Stage was given a modest redesign, and Fuandou was included. The obstacle now returned as the third obstacle, and unlike its predecessor, the obstacle was much more dangerous. While it still rotated on a central axis and was the same length at five meters, three rectangles had been cut into the bridge, so the competitors could either fall through the obstacle or cause the obstacle to flip by putting two much weight on one side of the obstacle.

While this version was proven to be much more difficult, it still did not take out a fair amount of competitors, especially in later tournaments, and most that failed the obstacle did so by taking missteps. Despite this, it occasionally was proven to be a time waster, contributing to Hanzawa Tomomi's timing out in KUNOICHI 4. It became the fourth obstacle in KUNOICHI 6 and KUNOICHI 7, where in these tournaments, the resting platform was placed higher up and curved.

KUNOICHI 4-7 version of Fuandou appeared as the third obstacle in American Ninja Warrior 5 in Denver, and was called Rotating Bridge. However, unlike in KUNOICHI, the area below the obstacle was filled with safety mats (rather than the water). In addition, there are significant difference where the bridge and the hole were significantly wider and the bridge was tilted instead of flat. 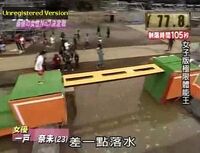 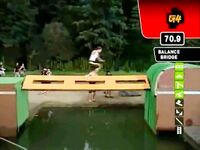