To date, the Final Stage has seven known forms. Each of these share a single, common goal: to scale the tower and reach the button at the top before the time expires.

Reaching the top of the tower before the time run out is referred to as kanzenseiha (完全制覇), translated roughly as "complete domination", and rendered on Ninja Warrior as Total Victory.

So far, after 37 SASUKE tournaments, only 39 have been admitted to the Final Stage, with only 6 of them have gotten there more than once:

Currently, there are only 4 competitors who had achieved kanzenseiha in SASUKE:

The original Final Stage consisted of climbing a 15 meter (49 feet) Rope Climbing, and the competitor must start climbing from a seated position. Kawashima Takayuki was the first to try it. This was also the only version to be attempted in its debut.

A final stage consisting of a Spider Climb and a triple Rope Climbing was shown at the end of SASUKE 17 and the 24th tournament, but was not built.

The third version was revealed by Urushihara Yuuji in the 22nd competition. It consisted of a 13m Heavenly Ladder followed by a 10m G-Rope. The time limit was reduced from 45 to 40 seconds in the following competition. This ensnared Nagano Makoto, who was 0.21 seconds late in SASUKE 23. Had the time limit been kept the same, Nagano would have achieved Kanzenseiha for the second time, and he would've become the first person to do it.

The fourth version consisted of a 20 meter Rope Climbing, which was referred as the Ultimate Rope Climb. In addition, the time limit was kept the same. Matachi Ryo was the first to attempt it in SASUKE 27, and came less than 2 meters from victory when the rope was cut, however, Urushihara Yuuji achieved kanzenseiha later that night.

The fifth version was almost exactly the same as the previous version, the difference being that there are no steps leading to the obstacle, and that the Rope Climbing was 3m taller. It was briefly seen through SASUKE 28 and has never been attempted ever since, as it only lasted for one tournament.

The sixth version of the Final Stage was shown in several pictures prior to the airing of SASUKE 29. The Spider Climb and Rope Climbing returned, with the height of the tower increasing to 24m, with a time limit of 30 seconds.

The seventh version was revealed by Inui Masato, the director of SASUKE via Twitter. Both the Spider Climb and Rope Climb returned, along with a new obstacle in the form of the Salmon Ladder, a notable Second Stage obstacle. The time limit would increase to 45 seconds, revealed in SASUKE 35. In SASUKE 35, the Salmon Ladder was modified, allowing an easier transition for competitors and was officially referred as the Salmon Ladder Jūgo Dan.

Interestingly, out of all the athletes to attempt the Final Stage, none have had a weight of more than 70 kg, perhaps as heavier competitors' weights would play as a disadvantage in the Third Stage.

The first ever final stage included a single 15 meter rope climb, named the Tsuna Nobori (綱登り) with a 30 second time limit. Competitors had to start in a sitting position. Also, the banner of Kinniku Banzuke was raised on the back of the tower, for the reason SASUKE at that time was a Kinniku Banzuke event.

Although this version only lasted for four tournaments, there were a total of twelve attempts made, including three by Omori Akira. In SASUKE 3, Yamada Katsumi joined four others in the Final Stage and came within inches of kanzenseiha.

The next tournament, Akiyama Kazuhiko, who had previously never passed the Second Stage, became the first man in history to achieve kanzenseiha by clearing with 6.0 seconds left.

After Akiyama Kazuhiko's kanzenseiha in SASUKE 4, the Final Stage went through its first revision.

The time limit was left unchanged. In addition, the Spider Climb would separate after 15 seconds. This separation brought down only one competitor, Jordan Jovtchev, in SASUKE 8. The only other person to fail the Spider Climb, Yamamoto Shingo, dislocated his shoulder in his attempt.

Although being labelled as 12.5 m, the Spider Climb is actually only 12 meters long (some tournaments stated the actual length), with the remaining 50 cm being a gap between it and the Tsuna Nobori. This proved to be very difficult for most challengers, as they lost precious seconds to complete the transition. Also, the 50 cm gap implied that they have to climb a distance on the Tsuna Nobori by their hands only before their foot can reach the rope.

Kanzenseiha was almost achieved in SASUKE 12, where Nagano Makoto failed to press the button by 0.11 (1/9) seconds. Nagano also came close from victory in SASUKE 13 (About 22.4 meters up). He would later clear the stage four tournaments later with 2.56 seconds left to achieve kanzenseiha in SASUKE 17.

After Nagano's kanzenseiha in SASUKE 17, TBS showed the SASUKE 5~17 version of the Final Stage being demolished and coming up from the rubble was a new Final Stage.

This Final Stage looked extremely difficult as it consisted of a Spider Climb and three ropes alternating from right to left to right. It is speculated that this was the design of the Final Stage that the producers wanted, however it was never used due to technical problems.

This Final Stage was also showed at the end of SASUKE 24 but once again, it was not used.

From the pictures provided by G4 and Taiwanese competitor Li En Zhi, and from the new SASUKE Plug-and-Play game, it had been suggested that the new Final Stage consisted of a Metal Ladder and Final Climb. However, there is no absolute verification that it was the actual Final Stage.

The time limit of the new Final Stage was also raised to 45 seconds. After Urushihara's run in SASUKE 22, the time limit was reduced to 40 seconds.

The following tournament, Nagano Makoto attempted the Final Stage, now with a 40 second time limit, and came within inches of the goal. He would have cleared easily had the time limit been kept the same.

The same was true of Hashimoto Kouji in the next tournament. A total of five people attempted it in SASUKE 24, with Urushihara as the only returning finalist. He would defeat the Final Stage with 3.57 seconds to spare, earning the third ever kanzenseiha.

This is the only version of the final stage which was attempted after someone had cleared it (due to Urushihara being 3rd in order, while the other two clears, Akiyama and Nagano, were both Last Man Standing).

Unlike the first two versions, if competitors didn't reach the goal within the time limit, the rope would not be cut (to prevent injuries from colliding with the Heavenly Ladder). Instead, competitors who failed are slowly pulled up to the top of the tower (as in SASUKE 23), or are slowly rappelled down (as in SASUKE 24).

All results based on the TBS broadcast and external information found

The tower also had a beam of blue light coming out of the top of it; a feature not present in SASUKE 26. Also, there were a series of steps that would lead to the platform in which competitors must start the stage. The Final Stage was finally unveiled, with UNCLI members Matachi Ryo and Urushihara Yuuji's Third Stage breakthroughs, in SASUKE 27; and consists of a 20-meter Tsuna Nobori, named the Ultimate Rope Climb (アルティメットロープクライム) with a time limit of 40 seconds.

The tower remained at 23 meters to the goal, with the first three meters being the steps that would lead to the starting platform. This version was conquered by Urushihara Yuuji with record time (6.71 seconds left), marking this his second time achieving kanzenseiha, a first in SASUKE history.

This is currently the only version of the Final Stage to be cleared in the tournament of its introduction. Similar to the first version, if the competitors didn't reach the goal within the time limit, the rope would be cut (as shown during Matachi Ryo's Final Stage run).

The fifth version of the final stage was briefly seen in Third Stage and in a trailer of SASUKE 28.

Its design was similar to that of the fourth version of the Final Stage, consisting of the Tsuna Nobori. Unlike its predecessor, there were no steps leading to the stage, thus increasing the rope's height to 23m. It was only used for one tournament.

This is also the only version of the Final Stage to have never been attempted.

The previous Final Stage tower, consisting of a Rope Climb was thrown out all together, and the return of the SASUKE 5 to SASUKE 17's Final Stage took its place.

The tower's height has once again increased, this time to 24m, a meter higher from its previous version. The Spider Climb (スパイダークライム) has decreased to 12m, while the Tsuna Nobori (綱登り) was slightly modified in length to 12m from that of its original predecessor, at 10m, with a time limit of 30 seconds, as its predecessor. Unlike its predecessor, the gap between the Spider Climb and the Tsuna Nobori is removed, resulting in an easier transition to the rope for the three competitors who attempted it.

This version of the Final Stage was first attempted by Kawaguchi Tomohiro in SASUKE 30 who made it only 15 meters up. Matachi Ryo, who went after Kawaguchi, came one meter short of achieving kanzenseiha. In SASUKE 31, Morimoto Yūsuke became the first to complete it, with 2.59 seconds left, achieving the show's fifth kanzenseiha, and just the fourth person to achieve it.

Unlike its predecessor, the walls of the Spider Climb did not split after the first fifteen seconds, due to the structure of the stage, and the rope was also no longer cut after the competitor fails for safety reasons, continuing the tradition of the Shin-SASUKE era. In SASUKE 31, there were bleachers placed on the back of the tower for the audience present during the filming to see the attempts by the finalists.

During May 28th-29th, 2016 (the taping dates of SASUKE 32), a few pictures were revealed on Twitter, showing the new Final Stage. The height of the tower was increased by 1m, making for a total height of 25m.

For the first time in the Final Stage, there are three obstacles:

Even though it is already revealed in SASUKE 32, the time limit is only revealed during SASUKE 35's Navi, spanning at 45 seconds.

Similar to the previous version of the Final Stage, the walls of the Spider Climb did not split after the first fifteen seconds, due to the structure of the stage.

Due to the difficulties of the Third Stage, this Final Stage was left unattempted until SASUKE 35, with Morimoto Yusuke being the first ever competitor to attempt it. However, he was timed out about 5 meters short of the goal, due to struggling at the Salmon Ladder Jūgo Dan.

In SASUKE 36, for the first time in the history of SASUKE, the conclusion of the tournament was broadcast live. Competitors who made it to the Final Stage will attempt it at the Yokohama Red Brick Warehouse, which concurrently airing with the pre-taped broadcast on New Year's Eve. Morimoto once again attempted the stage in which he performed much better, but the wind caused him to take too much time to transfer to the Tsuna Nobori, and as the result, he came out half a meter short of achieving kanzenseiha for a second time.

In SASUKE 37, two new competitors attempted the Final Stage: Tada Tatsuya and Rene Kaselowsky, but both failed at the Salmon Ladder Jūgo Dan, Tada from timing out due to the bar slanting, and Rene being disqualified via the bar slipping off the rungs entirely, both making it only about 12-13 meters up. 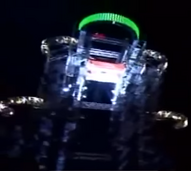 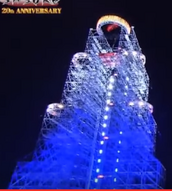 Final Stage (SASUKE 18-27)
Add a photo to this gallery

Retrieved from "https://sasukepedia.fandom.com/wiki/Final_Stage?oldid=78938"
Community content is available under CC-BY-SA unless otherwise noted.