Elet Hall is a Ski Lift Operator from Cavetown, Maryland who has competed in four American Ninja Warrior tournaments.

In American Ninja Warrior 4 he made it to Mt. Midoriyama, but failed on the Unstable Bridge in Stage 2 .

In American Ninja Warrior 5 he completed the Baltimore Qualifying Course in the fastest time of 53 seconds. However, he fell victim to the Salmon Ladder after flying through the course once again.  He was selected to be a wild card at Mt. Midoriyama. He cleared the First Stage with 39 seconds left. In the Second Stage, however, he failed on the Double Salmon Ladder.

In American Ninja Warrior 6, he had the second fastest time in the St. Louis Finals. At Mt. Midoriyama, he had the fastest time on Stage 1 with 46 seconds remaining. On Stage 2, he was only the 2nd person to complete the stage. On Stage 3, he fell on the Floating Boards transitioning to the fourth board. He also represented Team USA in USA vs. The World. 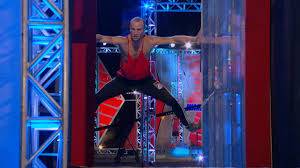 In American Ninja Warrior 7, he had the fastest time in the Pittsburgh qualifying round. In the finals however, he had failed on the Doorknob Arch, but still qualified to Las Vegas. In Vegas, Elet went through the first three obstacles in under 30 seconds. Unfortunately, Elet popped his shoulder while trying to stick on to the walls on the Jumping Spider and failed. It was a very shocking and disappointing performance but Elet vowed that he would train harder and come back even stronger next season but ultimately did not compete in American Ninja Warrior 8. He hasn't competed since. It is possible that he has either given up or he was not invited back like many others. He has said on Instagram that his schedule's been busy. However, he doesn't rule out the possibility of a comeback in the near future.

Retrieved from "https://sasukepedia.fandom.com/wiki/Elet_Hall?oldid=76748"
Community content is available under CC-BY-SA unless otherwise noted.