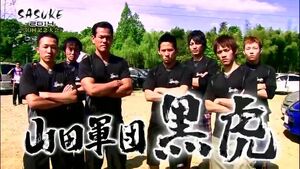 The Black Tigers (also known as Yamada Gundan) (山田軍団・黒虎) are a group of rookies led by Yamada Katsumi.

Yamada formed the group before SASUKE 29 and trained them on his home course. In SASUKE 29 four of them competed, however all four failed the First Stage with three of the four being digested. The group returned in SASUKE 30 with Yamada competing alongside them. However, only three were invited this time. The results were better however with Yamamoto Hiroshige clearing the First Stage. The other two Matsubara Shinji and Watanabe Yousuke both failed the First Stage. Yamamoto, however went out on the Swap Salmon Ladder when he landed with the bar crooked on the last level and was disqualified. In SASUKE 31 the results were better than the last tournament with Yamamoto Hiroshige clearing the First Stage again, Matsubara Shinji failing in the Lumberjack Climb due to the time and Watanabe Yousuke doing his best competition failing in the Soritatsu Kabe. Yamamoto Hiroshige failed in the Second Stage, timing out on the Backstream.

In SASUKE 32, Shinji and Hiroshige returned, but doing worse than their previous attempts; Shinji failed the new TIE Fighter, whereas Hiroshige, who had high hopes to make a three-peat of clearing stage one, timed out by 0.1 seconds before hitting the buzzer atop the Lumberjack Climb. This was due to taking up time and two attempts on the Soritatsu Kabe, which was enough for his run to come to an abrupt end. Obata Satoshi also makes his debut in this tournament, starting out with an impressive save on the Rolling Hill, but ultimately missed the bar on the new Double Pendulum.

Retrieved from "https://sasukepedia.fandom.com/wiki/Black_Tigers?oldid=75228"
Community content is available under CC-BY-SA unless otherwise noted.