Ōmori Akira (大森 晃) is a Japanese comedian who is best known for his early performances. He reached the Final Stage three consecutive times (in the first three SASUKE tournaments), a feat that has only been replicated by Nagano Makoto in SASUKE 11 to 13. However, he never made it more than 12 meters up the Tsuna Nobori.

In SASUKE 1, he cleared the First Stage with more than 24 seconds remaining, followed by a narrow Second Stage clear with less than a second remaining. The balance-oriented original Third Stage posed no problem for him, and in the Final Stage he performed the best out of all the competitors timing out only 3 metres from the buzzer.

In SASUKE 2, he wore 99 due to going the furthest in the last competition. As expected, his success was repeated, again beating the First Stage with time to spare and narrowly beating the Second Stage. In the Third Stage, he defeated the Pipe Slider that had eliminated 7 out of the previous 8 competitors to become one of only two to move on to the Final Stage. However, he got a very slow start on the Tsuna Nobori and didn't even make it halfway before timing out.

SASUKE 3 saw Omori return to the Final Stage once again, this time wearing 100, however similar to SASUKE 2 the tougher course had posed its toll on his body, and he once again barely made it halfway up before timing out.

He is currently the only competitor to have a 100% clear rate on the Third Stage with more than one clear.

In SASUKE 4, he shocked the world and failed the Rolling Maruta, an obstacle that he had passed once before. This began a string of four First Stage failures. In SASUKE 5, he failed the Jump Hang even though he had both hands on the net. When he failed in SASUKE 6 and 7, a competitor who started competing around the time was laughing at his failures. Omori was tired of it, and he retired after SASUKE 7.

After nine years, he returned to SASUKE again and competed in SASUKE 37 with #4, his lowest number ever. He was able to beat the Quad Steps and Rolling Hill in a fast pace, but unfortunately he failed on the Wing Slider. His fellow competitors were disappointed and Shingo was telling them how he should have done the obstacle by showing them.

He returned for SASUKE 38, wearing #17. Although his run was all cut, it was shown on Paravi that he failed the Rolling Hill.

He also competed in Celebrity Sportsman no. 1. 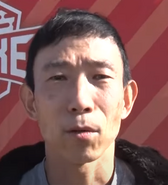